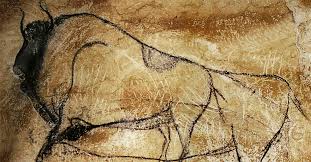 A heap of I’s some struggling to voice themselves others lost in the echoes a blurred chorus. It is the last day of the year. Another year is waiting in Australia but what are years anyway these days? Looking at the holes we have worn in this one who can blame me for slipping in the squalid mass? I can said I hoping to distinguish myself oh no you don’t said another I the blame game’s not for free. Soon other voices were scrambling to be heard and we passed the black line of midnight quarreling and once it was behind us it was just another line.

I sat alone suddenly gathered in thought. It was about a drawing in a cave a bison and the line was so brave and true the hump of the shoulder the brusque dark head the artist had solved the puzzle of the uneven rock face and the bison moved. Such a brave line. And I let the drawing enter me in the rock cave the dark walls of my heart and live —all thirty-five thousand years of it —and I became the bison.

8 thoughts on “A Poem for the Old Year”