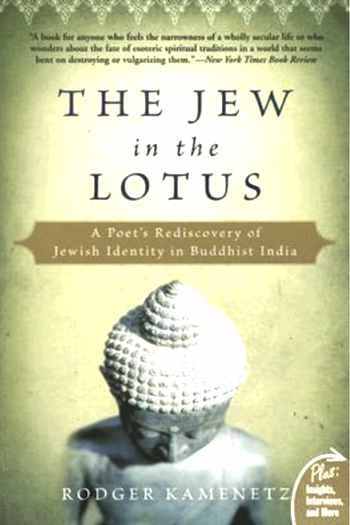 The Jew in the Lotus:

A Poet’s Rediscovery of Jewish Identity in Buddhist India

While accompanying eight high–spirited Jewish delegates to Dharamsala, India, for a historic Buddhist–Jewish dialogue with the Dalai Lama, poet Rodger Kamenetz comes to understand the convergence of Buddhist and Jewish thought. Along the way he encounters Ram Dass and Richard Gere, and dialogues with leading rabbis and Jewish thinkers, including Zalman Schacter, Yitz and Blue Greenberg, and a host of religious and disaffected Jews and Jewish Buddhists.

This amazing journey through Tibetan Buddhism and Judaism leads Kamenetz to a renewed appreciation of his living Jewish roots.

“A book for anyone who feels the narrowness of a wholly secular life ….”
—New York Times Book Review

“It’s fascinating to see what is good and true and real in terms of different religious sensibilities.”
–E. L. Doctorow

“A profound discussion of religion, exile, and survival in our time.”
–Andrei Codrescu, poet and NPR commentator

“A feast of truth sharing, self-examination of lineage, humor, and good will.”
–Ram Dass

“Kamenetz, a poet and professor of English, accompanied a group of eight Jewish leaders to Dharamsala in October 1990 for a Jewish/Tibetan Buddhist interfaith dialog that reinspired him both spiritually and as a Jew. The narrative reveals interesting parallels, thorny problems, and profound mystical insights as Kamenetz relates his encounters with Tibetan leaders, including the Dalai Lama, and with Jewish rabbis and cultural leaders. Highly recommended.”
—Library Journal

“Kamenetz, a poet and a Jew, was invited to attend and write about a historical meeting between a delegation of American Jews and a group of Tibetan Buddhists that included the Dalai Lama. This interfaith get-together was inspired, in part, by the increasing number of Jews who have become Buddhists as well as the Dalai Lama’s perception of Jews as “survival experts.” The Dalai Lama felt that the Jews, experts in exile and the preservation of faith and practice, would offer advice and comfort; participating rabbis were intrigued by the surprising similarities between the two religions, including esoteric traditions and a profound awareness of suffering. Kamenetz not only chronicles the resultant discussions, which proved to be enlightening and emotional, but also profiles a number of Jewish Buddhists, including Allen Ginsberg and Ram Dass. As his investigation throws his own beliefs and assumptions into high relief, Kamenetz is amazed and humbled by the intensity and altruism of Buddhism. Kamenetz defines and comments upon these complex matters with skill, personableness, and a welcome dash of levity.”
—Booklist

“A personal journey of Jewish spiritual renewal in dialogue with the Dalai Lama. Summoned by the Dalai Lama to Dharamsala, the retreat in northern India that the Tibetan exile community has inhabited since the Chinese invasion of Tibet in 1959, a group of eight Jewish leaders goes to India for a week of discussions in order to teach the Tibetan spiritual leader what the Jewish tradition has learned about religious self-preservation. Jewish poet and designated eyewitness Kamenetz (English/Louisiana Univ.) comes along for the ride and on the way learns about the richness of his own Jewish identity by hearing about its similarities to Tibetan Buddhism. Familiar with survival in the face of exile and near-annihilation, the Jewish leaders, mostly rabbis, communicate their wisdom to the Dalai Lama. While we are prepared for a two-way exchange, Kamenetz tells us mostly about the rich, contradictory life of modern Judaism: from the Orthodox Irving (“Yitz”) and Blu Greenberg, who are concerned with maintaining the purity of religious observance, to the kabbalistic Zalman Schachter-Shalomi, who, as a leader of the Reconstructionist movement, unites the esoteric traditions of Jewish mysticism with a post-1960s eclecticism. At the heart of the book is an exchange between Schachter-Shalomi and the Dalai Lama about the nature of angels and reincarnation, during which the Jews and Buddhists present realize the close parallels between their traditions. The large number of “JUBUs,” Jewish Buddhists (including Allen Ginsberg) Kamenetz encounters leads him to question the problem of some American Jews’ conversion to Buddhism in response to what they perceived as Judaism’s closed spiritual door. But as the reader discovers, the Jewish esoteric tradition, including specific spiritual practices such as meditation, is available to the ardent seeker. A highly entertaining personal account of one man’s surprising journey into the mystical heart of Judaism.”
—Kirkus Reviews